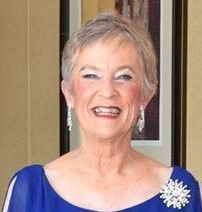 Joan Henderson came to a guest night rehearsal of the Skyline Harmony Chorus in 1997. Although she had a wide range of previous choral experience, including a small a cappella women’s group in college, she was unfamiliar with the barbershop style of harmony. When she heard the chorus sing one particular song that night though, she was hooked and auditioned for membership. A short 18 months later, the Chorus unexpectedly found itself without a director. Joan volunteered to take on the Director position and brought her experience as a singer and pianist, along with her knowledge of musical theater, to further the chorus’s singing and performance skills.  Joan achieved the proficiency of becoming a Certified Director in 2002 through Sweet Adeline International’s education “Director Certification” program.

She has always stressed the importance of the educational opportunities offered by the Sweet Adeline organization and takes advantage of them, both for herself and to bring the information back to the chorus. She continues to be a “learner” with the rest of us. She strives to lead rehearsals that are both educational and fun, as she recognizes that it’s equally important for members to stay connected. Joan has led, taught, encouraged, and even “whipped us into shape” a time or two, as we challenge ourselves and each other to be the best singers possible.

Joan worked at the UVa Medical Center for 24 years. At the end of 2019, she retired from being the Risk Management Coordinator, in which she was involved in the defense of UVa personnel named in medical malpractice claims. 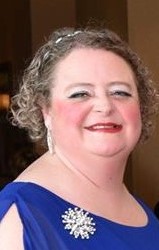 Kristi Nelson has been singing with Skyline Harmony Chorus since 2003.  She was introduced by a friend from her church choir.  She came to a Guest Night and was encouraged by the director to sing lead.  At the end of the evening, she kindly informed the director that she was not a lead, she was a tenor!  Kristi  has served as Team Coordinator, Communications Coordinator, Team Secretary, Tenor section leader, Lead section leader, and Assistant Director (not all at the same time).  Kristi has no formal training in music, although she has sung in church choir for most of her life.  She is a prime example of the value of Sweet Adelines’ vocal education!

In her professional life, Kristi is an analytical chemist and enjoys boring her friends with details of her work.  She has published papers that nobody wants to read, and she knows things that nobody else would bother knowing (like the fact that your blood type depends on the sort of glycans attached to your proteins).